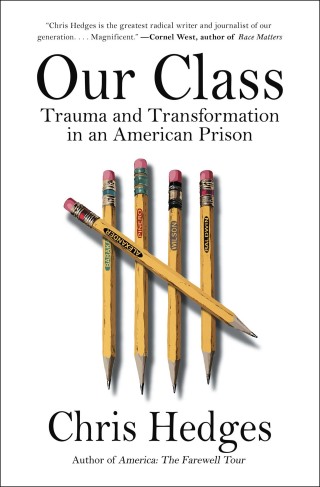 Trauma and Transformation in an American Prison

A haunting and powerfully moving book that gives voice to the poorest among us and lays bare the cruelty of a penal system that too often defines their lives.

Pulitzer Prize–winning journalist Chris Hedges has taught courses in drama, literature, philosophy, and history since 2013 in the college degree program offered by Rutgers University at East Jersey State Prison and other New Jersey prisons. In his first class at East Jersey State Prison, where students read and discussed plays by Amiri Baraka and August Wilson, among others, his class set out to write a play of their own. In writing the play, Caged, which would run for a month in 2018 to sold-out audiences at The Passage Theatre in Trenton, New Jersey, and later be published, students gave words to the grief and suffering they and their families have endured, as well as to their hopes and dreams. The class’s artistic and personal discovery, as well as transformation, is chronicled in heart-breaking detail in Our Class. This book gives a human face and a voice to those our society too often demonizes and abandons. It exposes the terrible crucible and injustice of America’s penal system and the struggle by those trapped within its embrace to live lives of dignity, meaning, and purpose.

Chris Hedges: Chris Hedges is a Pulitzer Prize–winning journalist who was a foreign correspondent and bureau chief in the Middle East and the Balkans for fifteen years for The New York Times. He previously worked overseas for The Dallas Morning News, The Christian Science Monitor, and NPR. He is host of the Emmy Award­–nominated RT America show On Contact. Hedges, who holds a Master of Divinity from Harvard University, is the author of numerous books and was a National Book Critics Circle finalist for War Is a Force That Gives Us Meaning. He has taught at Columbia University, New York University, Princeton University, and the University of Toronto. He has taught college credit courses through Rutgers University since 2013 in the New Jersey prison system.