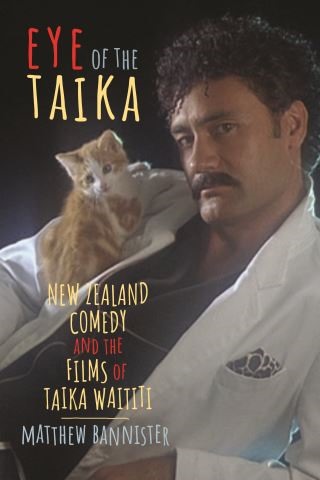 Eye of the Taika

New Zealand Comedy and the Films of Taika Waititi

Eye of the Taika: New Zealand Comedy and the Films of Taika Waititi is the first book-length study of comic film director and media celebrity Taika Waititi. Author Matthew Bannister analyses Waititi’s feature films and places his other works and performances—short films, TV series, advertisements, music videos, and media appearances—in the fabric of popular culture. The book’s thesis is that Waititi’s playful comic style draws on an ironic reading of NZ identity as Antipodean camp, a style which reflects NZ’s historic status as colonial underdog. The first four chapters of Eye of the Taika explore Waititi’s early life and career, the history of New Zealand and its film industry, the history of local comedy and its undervaluation in favor of more "serious" art, and ethnicity in New Zealand comedy. Bannister then focuses on Waititi’s films, beginning with Eagle vs Shark (2007) and its place in "New Geek Cinema," despite being an outsider even in this realm. Bannister uses Boy (2010) to address the "comedian comedy," arguing that Waititi is a comedic entertainer before being a director. With What We Do in The Shadows (2014), Bannister explores Waititi’s use of the vampire as the archetypal immigrant struggling to fit into mainstream society, under the guise of a mockumentary. Waititi’s Hunt for the Wilderpeople (2016), Bannister argues, is a family-friendly, rural-based romp that plays on and ironizes aspects of Aotearoa/New Zealand identity. Thor: Ragnarok (2017) launched Waititi into the Hollywood realm, while introducing a Polynesian perspective on Western superhero ideology. Finally, Bannister addresses Jojo Rabbit (2019) as an "anti-hate satire" and questions its quality versus its topicality and timeliness in Hollywood. By viewing Waititi’s career and filmography as a series of pranks, Bannister identifies Waititi’s playful balance between dominant art worlds and emergent postcolonial innovations, New Zealand national identity and indigenous Aotearoan (and Jewish) roots, and masculinity and androgyny. Eye of the Taika is intended for film scholars and film lovers alike.